India is one of the four ancient civilizations, and is known for its long history and affluent cultural heritage. Contemporary Indian art demonstrates an alternative direction in raising criticism of one’s own country’s social reality and controversial issues including class system, the wealth gap and political agendas.

This exhibition has selected 63 artworks by 29 artists, and intends to present the facets of art and aestheticism the general outline of contemporary Indian culture and social life. 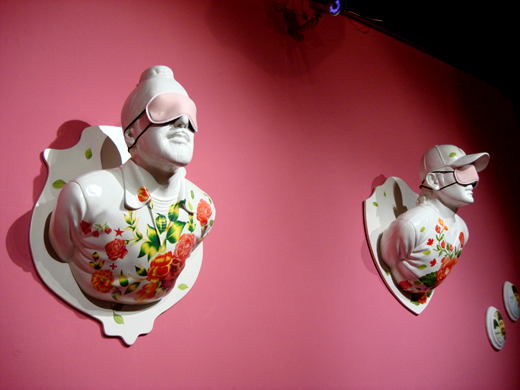 The artistic style of the duo is as unpredictable as fast changing, being product of the intersection between the Western popular culture and the deep-rooted traditional culture of India. Their works often explore the gradual loss of self-identity of the Indian society, and the influences brought by the globalization.

At the same time, the duo illustrated through human sculptures and portraits the different groups of people brought by the new era. Among these groups are: the farm boys who dream of fame, and the young delinquents who roam the streets, all of which reflects the influences of foreign cultures and the shift of aesthetic values in Indian society. 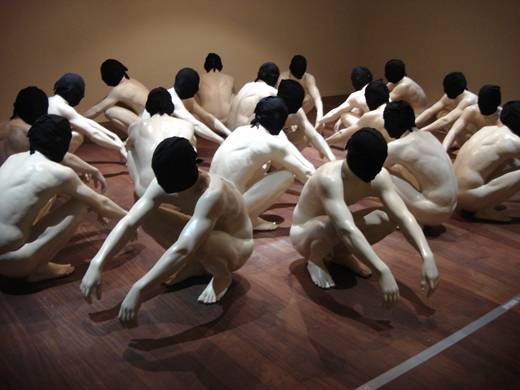 G.R. Iranna’s works are known to combine allegories with theatrical elements, exploring physical sufferings with spiritual struggles. The sculpture installation Dead Smile is mysterious even in its name, portraying twenty life-size sculptures of strong men in the same crouching position, but facing different directions. Their heads are covered with black cloths, erasing their individuality while bestowing them a common facial expression.

Under these circumstances, the work portrays from the unity of individuals a “community of fate.” Even though each individual sculpture is essentially the same as the rest, they are mutually isolated from each other. 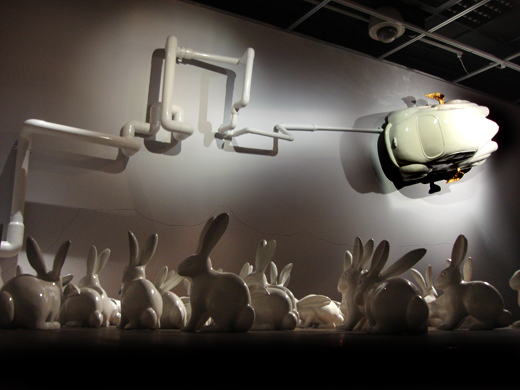 In this installation the artist humorously places a car with tiny golden wings climbing on the wall, and a herd of fiberglass rabbits gathered around its exhaustion pipe, inhaling all the smoke the car produces. Such imagery hints at the great disparities in the era of globalization, such as: the roles of developed countries and the ones that follow them, the value between “new” and “second-hand,” and the dominance of the industrial civilization over natural environment. 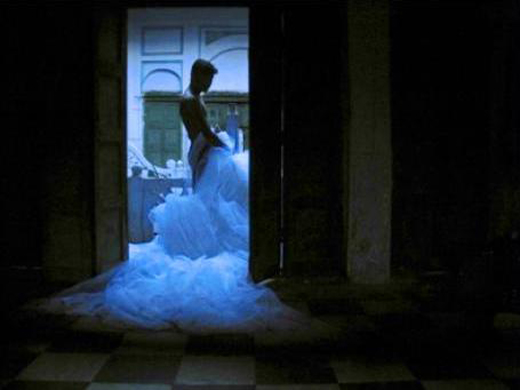 Shine Shivan believes that an individual’s gender and sexual orientation is not certain or defined at birth, but molded through intimate interactions with the social environment. His works explore the male identity under the post-feminism context, bestowing to the male gender an anti-traditional feminine image, and emotional projection towards the same sex.

In the photography and video works Sperm Weaver, Shivan displays male nude bodies carrying white tulle, which are commonly used in wedding dresses. In this work series, the long white tulle adopts different roles: a representation of inner femininity; a bridge that connects the land with riverbed, subtly suggesting the existence of a third gender; a depiction of the symbolic relationship and spiritual distance between body and earth; and an element that stirs the origin of life. 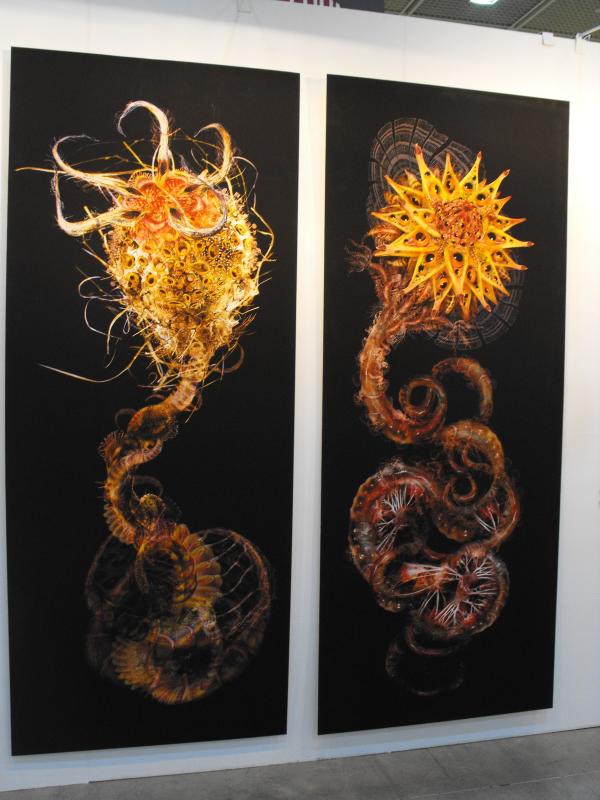 Archetype I, Chimera and Chimera II

Rohini Devasher’s works explore the possibilities of natural creation, including living organisms and their origin, development, and multiplication. She imitates nature’s mechanism of procreation through an artistic, scientific, and fantastical perspective, creating surreal works that resonate with all primitive lives, while hinting of a possible futuristic scenario.

Archetype I is inspired from Goethe’s search for “that which was common to all plants without distinction,” and explores the morphology of plants. The work refers to a purely ideological “archetype plant,” which is the basic structure that is common to all plants, and conveys its infinite possibilities of appearances in nature. 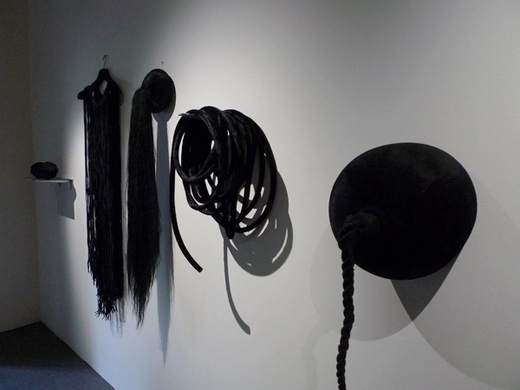 The Theater of Sade

Anita Dube’s works utilizes different readymade objects to explore the loss and rebirth of the individual and society as a whole, and the common experiences in human life, including: morality, desire, pain, and joy. The Theatre of Sade displays a set of daily objects, such as dentures or books, covered by black velvet.

The work transforms the exhibition space into a theater’s backstage, creating an atmosphere of tranquility and anticipation. Dube is known for using velvet to cover readymade objects, as if giving them a “secondary skin.” Through this action, the artist erases the objects’ intellectuality and brings out their sensibility, thus encouraging the audience to approach these strange yet familiar objects with an uncommon perspective. 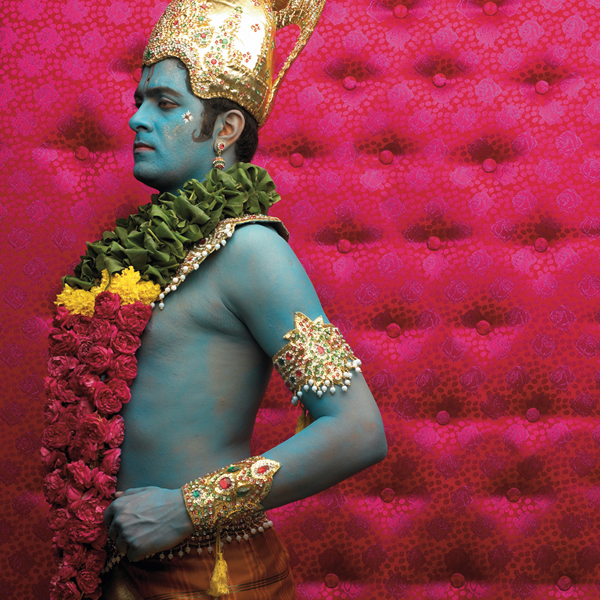 Nandini Valli Muthiah’s works explore issues of self-identity and social acceptance, while attempting to redefine the preconceived notions of faith and oneself, and to answer the ultimate question: “Who am I?” In the video series Definitive Reincarnate, the artist gives Vishnu a contemporary image. Vishnu is one of the three major gods of Hinduism, and titled as the Preserver of Life. 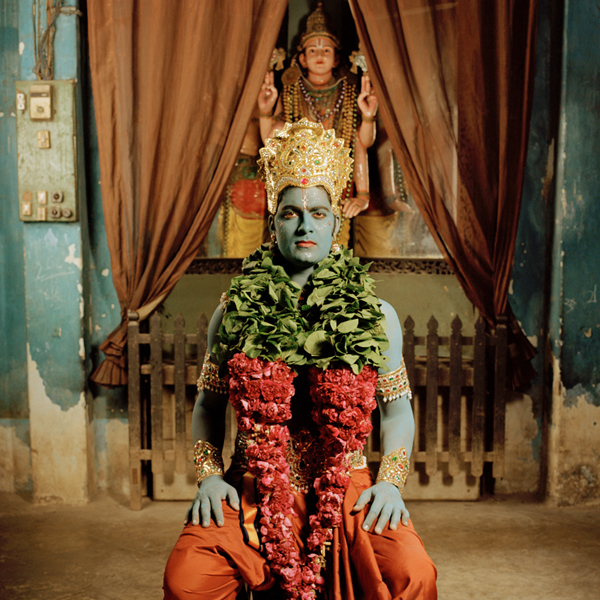 The work series reinterprets the concept of divine incarnation, borrowing elements of consumerism present in South Indian movies and mythological calendars. As result, the images of the deity, portrayed by celebrities, are blessed with gorgeous appearances, body postures, facial expressions, and garments. 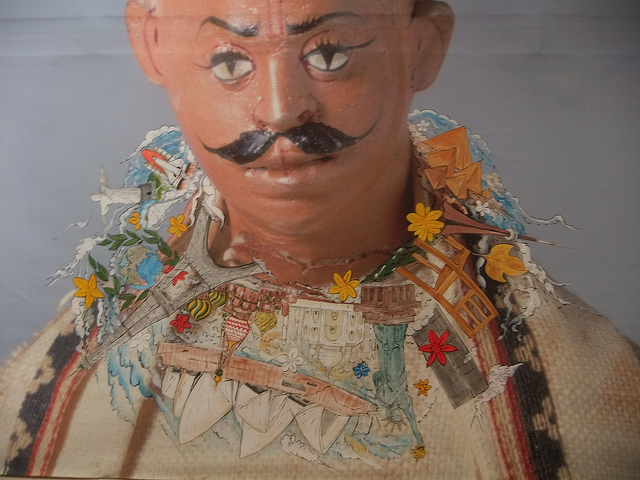 Look Into My Eyes

The artist tends to utilizes Indian traditions and a secular vocabulary to integrate elements of everyday life with accessible artistic language, in order to depict political issues and phenomena present in contemporary society.

Just as the Matryoshka dolls of Russia or the Barbie dolls of United States, the Mysore dolls are not just items of collection, but often the children’s confidants during their growth. Look into My Eyes is a large painting that depicts a newlywed couple, where the bride and the groom are dressed accordingly to South Indian traditions. Wreaths are put around their necks, decorated with landmarks from the world across, as if they are saying “even though we are common people, but it is our dream to travel the world.”