Through installations, photographs, and community-based projects, Jaar explores the public’s desensitization to images and the limitations of art to represent events such as genocides, epidemics, and famines. Jaar’s work bears witness to military conflicts, political corruption, and imbalances of power between industrialized and developing nations.

“I strongly believe in the power of a single idea,” says Alfredo Jaar. “My imagination starts working based on research, based on a real life event, most of the time a tragedy that I’m just starting to analyze, to reflect on…this real life event to which I’m trying to respond.”

In 1985 Alfredo Jaar went to Serra Palada, an open cast gold mine in north-eastern Brazil. There he photographed and filmed the astonishing working conditions of the self-employed miners. An insistence on the importance of context to the subsequent interpretation and distribution of his work has been central to Jaar’s practice; and the Serra Palada material was initially installed on a New York subway station alongside indicators of fluctuations in world gold prices. 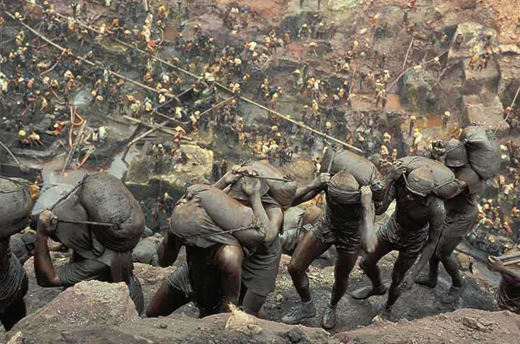 “I always describe myself as a project artist. I’m not a studio artist. I do not create works in my studio. I wouldn’t know what to do. I do not stare at the blank page of paper and start inventing a world coming from my imagination. Every work is a response to a real-life event, a real-life situation.”

The representation of geography and the intricacies of global relations influence Jaar’s every thought and action.

In more recent projects, this obsession has led to critical investigations of cartography. A logo for America was an explicit demonstration of the significance of the images and language of geography – its representation and articulation. It also appropriated an amendable technology that utilized Jaar’s interest in texts, words, film processes, and graphic design. Part of a six – year program sponsored by the Public Art Fund, Inc. in New York, Jaar was one of thirty artists invited to produce a 45 – second computer animation / intervention on the Spectacolor lightboard in the heart of Times Square. 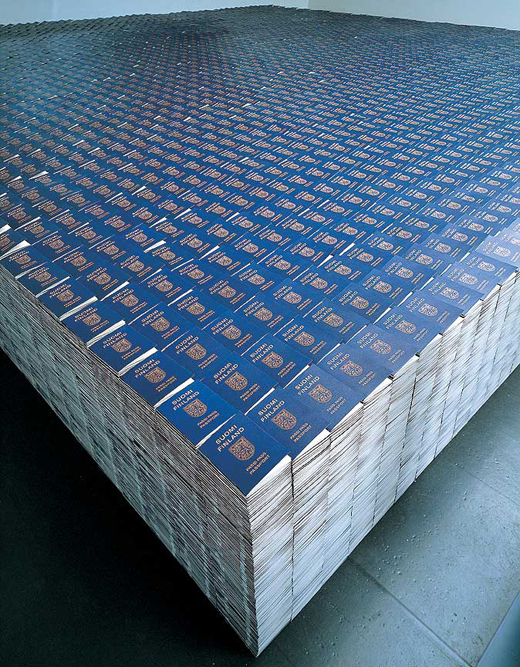 Finland has a historically stringent immigration policy, staunch nationalists they accept only a tiny fraction of the citizenship applications they receive, far less than any of their neighboring countries. Observing this, Jaar somehow managed to get 1 million Finnish passports printed up to represent the number of people who should have been nationalized as Finnish citizens but weren’t.  Now obviously this poses somewhat of a security risk, so the passports were housed behind a fortress of bullet-proof glass and the passports would be burned after the exhibit ended. 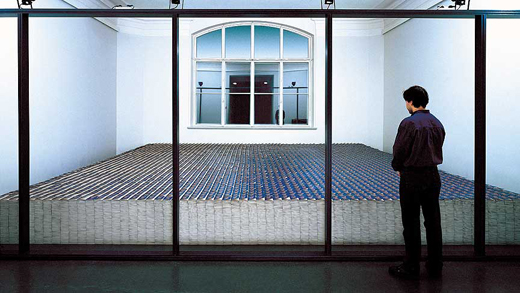 “I could say that everything I know about art, I learned as an architect. As an architect, I give myself a program, taking into account a specific space. Space is not just physical. It’s also social, cultural, political. Studying the space, I try to reach what we call the essence of the space. Then I combine that with the essence of what I am trying to say. All these elements are incorporated in the program, in which I have an objective.” 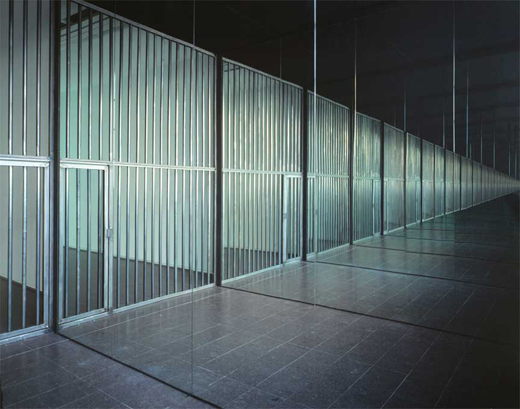 “A mirror is a simple object of daily life, and the perfect articulation of the narcissism of our society- a society that only cares for itself. In ‘Infinite Cell’, it’s about seeing ourselves in infinite projection and thinking about what we want to do as artists, as intellectuals. What do we want to say as producers of culture? And to whom are we speaking? Am I my public, or is it someone else? It also has to do with the horrors of the twenty-first century. This piece is probably one of my most emotionally charged works. Unfortunately, it has a universal life: all countries have histories of horror. And so, in a way, this piece asks, ‘How do we make art in the world, the way it is now? How do we make art today?’” 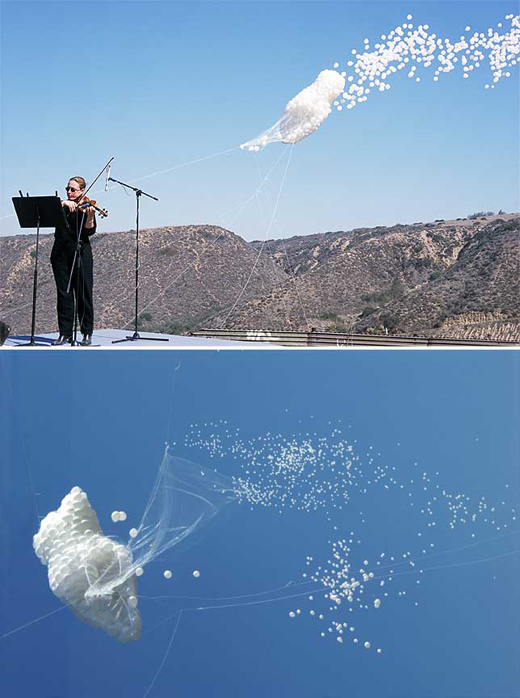 “People describe me sometimes as a conceptual artist, as a political artist, with work of a strong political connotation or social content. I always reject those labels. I’m an artist, and believe it or not I’m interested in beauty and I’m not afraid of it. It is an essential tool to attract my audience, and sometimes I use it to introduce horror because the audience has to be seduced.” 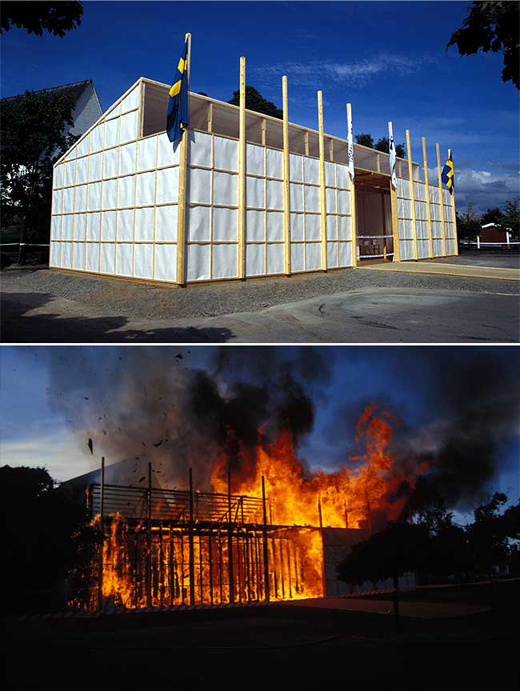 Jaar was invited to Skoghall where he constructed a paper museum, organized a one-day exhibition, and then had the structure set on fire. The timing, temporarily, and duration of this project—as well as its denouncement—had a theatrical character.

“I was shocked to discover that a community could exist for thirty years without any visible cultural or exhibition space. How do you represent it the absence of this space for culture in an entire community? I found it hard to believe that people could live without it the intellectual and critical stimulus that visual art can provide^to question, to speculate, and to search. It blew my mind. I sought a spectacular way to deal with this lack. I created an exhibition space for twenty-four hours and then burned it away I wanted to offer a glimpse of what contemporary art is and what it can do in a community. Then by “disappearing” it in such a spectacular way, I hoped to reveal its absence”. 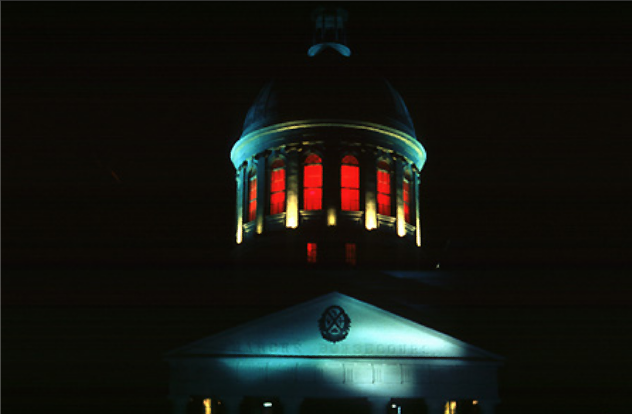 In Canada Alfredo Jaar completed a project referred to as Lights in the City, in 1999.  This is a historic landmark which had burnt around five times before Jaar completed this project. The building is called Copula of the Marche Bonsecours. There were approximately a hundred thousand watts of red lights installed within the Copula so that when a button is mashed the copula lights up with a red color inside of it very brightly so that it can be seen all around the city of Montreal.

Detonating devices have been placed in multiple places such as Accueil Bonneau, la Maison Eugenie Bernier and la Maison Paul Gregoire, and homeless shelters that are located within five hundred yards of the Cupola. Each time a homeless individual enters one of these areas they are free to push the buttons located within these areas so that the Cupola will light up inside with bright red colors. The entire point of this is to allow homeless individuals to be recognized as a person within the city without humility.

“I submitted my proposal to the people at the shelters. They appreciated that I was not exposing them through photography. They liked and approved my idea. These red lights connected to the shelters were my way of sending a distress signal to the city—of making the homeless visible withcnit pointing at them directly Of course, the red hghts also recalled the fires that consumed the building many times, but metaphorically. ”

“We wanted the Cupola to become a permanent monument of .shame, and other shelters wanted to join us and get connected, but six weeks later the mayor canceled it. like all of my projects, it failed. We did not give the homeless a home. We did not resolve their problem. We gave them a brief, hopeful moment when they regained their humanity, when people started acknowledging their presence, smiled at them, when the press also contributed to the dialogue, but eventually they returned to their status as homeless. With these projects you change so little…”