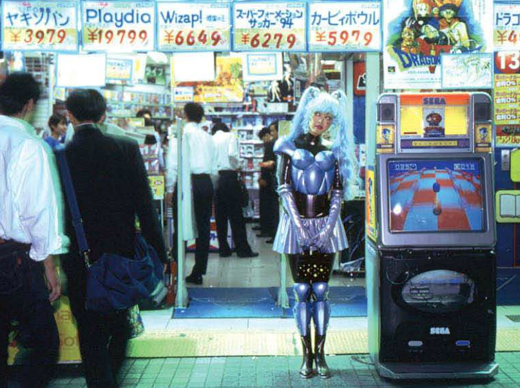 Mariko stands outside a busy Tokyo video store, dressed in form-fitting plastic armor and a cascading turquoise Barbie wig. She looks like a cross between a samurai waif and a robotic streetwalker who may have materialized from the video game beside her. 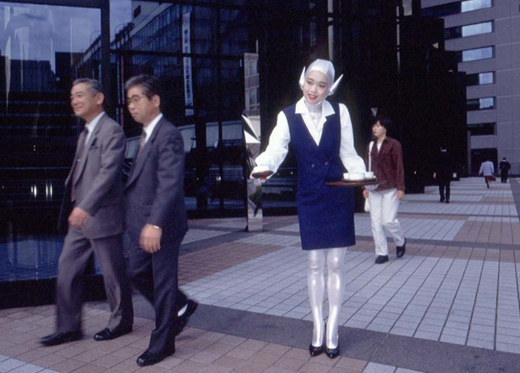 In this piece Mariko is an interplanetary geisha, dispensing tea to businessmen. Her ”office lady” uniform is regulation black, but her tight-fitting silver cap has pointy Martian ears. 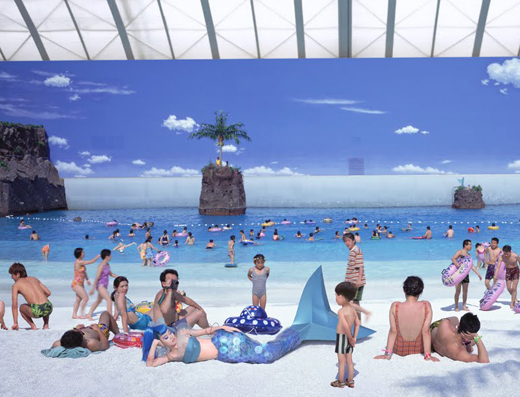 Mori digitally inserts herself four times into a photograph of Ocean Dome – the largest indoor theme park in the world, including an artificial beach, waves and all. Posing among happy Japanese bathers, Mori is costumed as a coy mermaid.  Hybrid creature, hybrid world; made for each other. 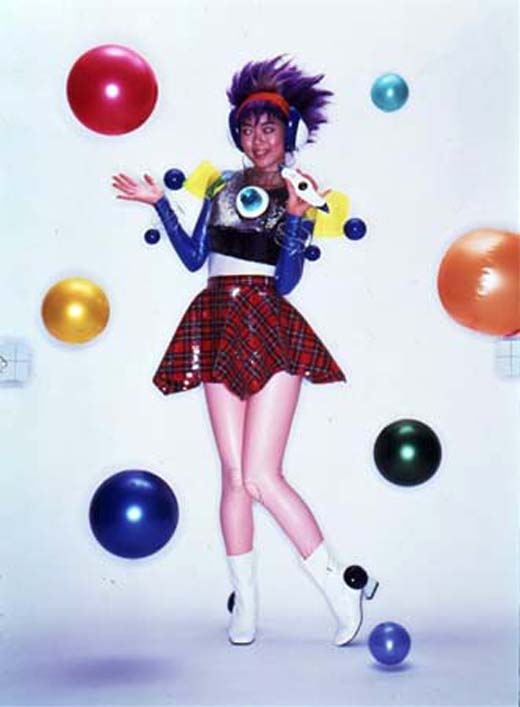 ‘Birth of a Star”,  named for a television talent show, she is the demonic punk incarnation of the look-alike, sound-alike ingenue singers who are Japan’s premier teeny-bop idols. 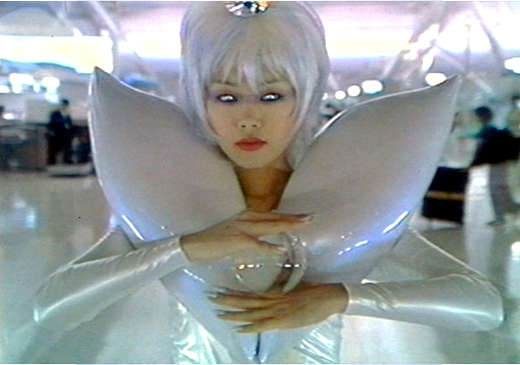 In the video, which plays simultaneously on five small screens, Mori looks coquettishly extraterrestrial. With silver hair and menthol-blue eyes, she rotates and massages a glass globe in her hands as if conjuring the future. Outfitted entirely in white, the artist takes on the role of ‘alien’ (much like the being depicted in Last Departure) erotically caressing a crystal ball in her hands. All the while, Mariko voice can be heard singing an evocative ballad in her native tongue.

Watch an excerpt of the video 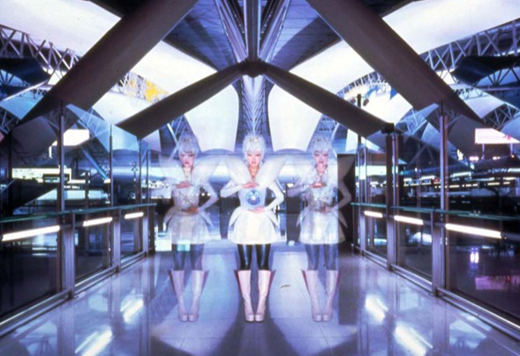 Mariko assumes the same persona but is shown full length and in triplicate, enshrined inside a fabulous spaceship (actually a digitally morphed image of Osaka’s hypermodern Kansai airport). There’s an iconic cast to this triad: the figures suggest Buddhist Barbarellas.  They hold a glass sphere in their hands, much like a crystal ball used by mystics for telling the future – perhaps they have come to show us our destiny. The crystal ball also alludes to the 1980 novel Nantonaku Kurisutoru (Somehow, Crystal), by Yasuo Tanaka that describes the lives of fashion obsessed young women much like the young ‘cyborgs’ who patrol the streets of the Yamanote district in Tokyo. 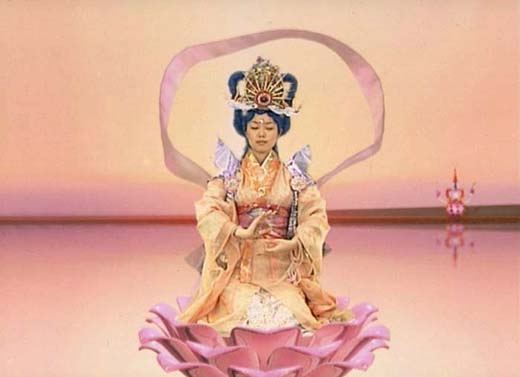 The title refers to the blissful emptiness that is the goal of Buddhist spiritual practice — Ms. Mori appears as the popular deity Kichijoten, in a peach-colored kimono and floating over a Dead Sea landscape tinted an acidic orange-pink. She executes a sequence of ritual gestures, accompanied by a band of cartoon musicians who zoom out toward the viewer before the whole scene dissolves into galactic mist. 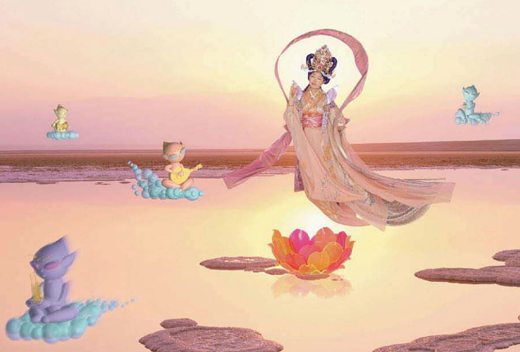 In order to participate in the aptly named experience, Nirvana, the viewer is led in to a dark room and asked to don 3D glasses before the film begins. The artist appears as a dancing Shaman dressed in a traditional ornate kimono and floating on a lotus flower. The Shaman is surrounded by pastel coloured elves called tunes, which each play a different Japanese musical instrument. Mariko hums and sings Japanese pop songs through a fuzzy echo chamber and the audience is treated to burst of cool, scented air on their faces. A crystal ball, much like the one featured in previous works, floats out of the sky and into the Shaman’s delicate hands.  The backdrop to Nirvana is a breath-taking view of the Dead Sea at dawn – empty yet pure.

Ms. Mori’s blend of eclectic religious symbolism, cyber technology and pop culture is well informed on all three fronts. And when she turns her attention to Japanese spirituality, as she does in the recent two-part ”Kumano,” the results are even more complex and erudite.

The work entitled Kumano is both a photograph and a film. The title refers to a Pacific peninsula in the south of Japan’s main island, a region of breathtaking natural beauty saturated in religious myth. It is the site of an important Buddhist pilgrimage circuit; legendarily Buddhist saints departed in boats from its shores in search of the Pure Land paradise. Also here are some of the country’s highest waterfalls, many of them worshiped as Shinto gods. The sun goddess Amaterasu, from whom the imperial family descends, has her shrine at nearby Ise.

In the ”Kumano” photo-mural, a purifying waterfall streams down through a grove of cedar trees; a high-tech forest shrine hovers like an apparition, as does Ms. Mori herself in the guise of the sun goddess with her symbolic mirror.

In the video, the image of the goddess flitting like a ray of light among the trees alternates with a scene of Ms. Mori performing the tea ceremony, whose elaborate etiquette she learned as a child. She gives it an unconventional tweak here by including an ancient bronze Chinese vessel among the utensils she uses, yet another indication of the hybrid, pan-Asian nature of much of her recent work. 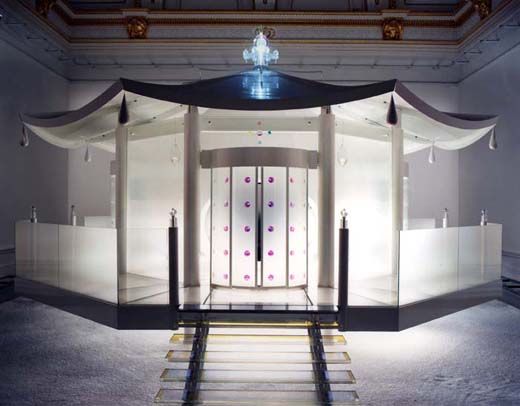 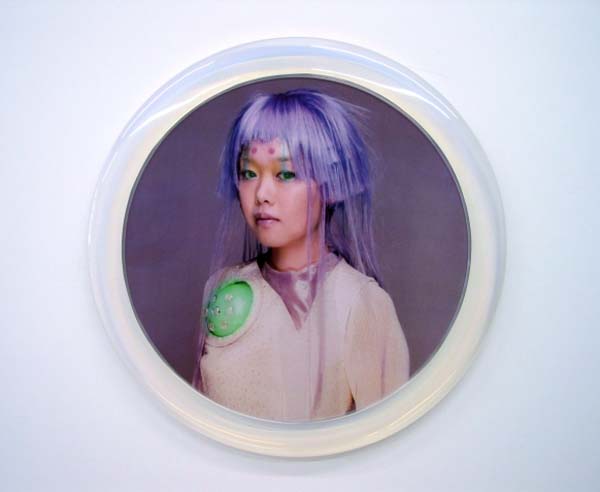 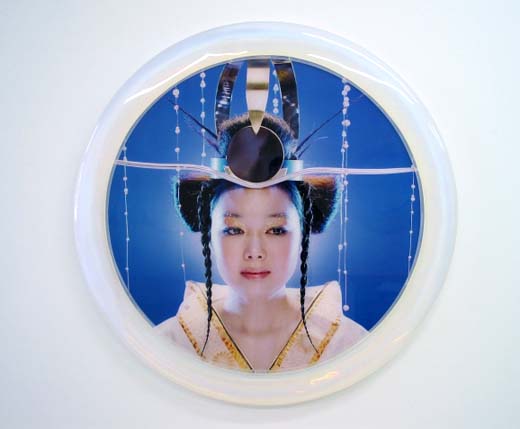 Mariko is dressed as Past, Present and Future (the three members of the Pratibimba triptych) performing Shinto rituals and running through the woods of the Wakayama Prefecture. The whole experience is made all the more enigmatic and enchanting due to the pretty, lilting songs the artist sings as she summons her audience toward the digital representation of the Dream Temple in the background. 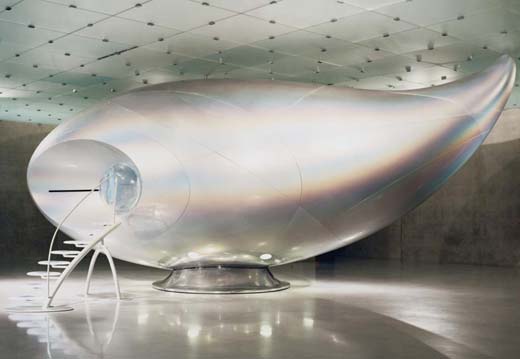 Oneness is a sculpture of six “alien” figures, linking hands in a circle. When the viewer participates in the work by hugging the figures and welcoming them, the aliens’ eyes light up and their hearts start beating. When all six are hugged at once the base lights up as well. Oneness is an allegory of connectedness, a representation of the disappearance of boundaries between the self and others. It is a symbol of the acceptance of otherness and a model for overcoming national and cultural borders. It also is a representation of the Buddhist concept of oneness, of the world existing as one interconnected organism. 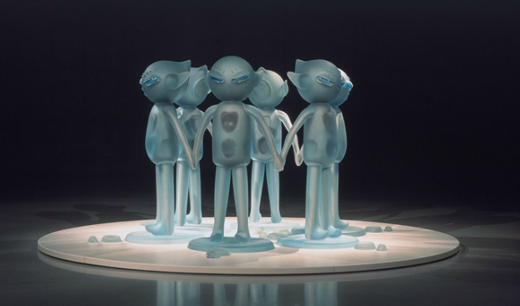 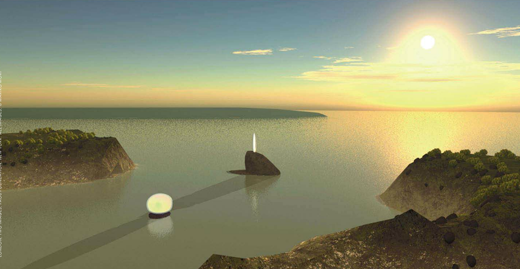 Primal Rhythms is sponsored by  the FAOU foundation, a  nonprofit that Mori established in 2010. This project  focuses on uniting technology with ancient forces to create a harmonious, primal work on an island far from civilization.

The foundation’s mission is to explore nature and promote ecology through art. Primal Rhythms, involves a Plexiglas column, and the intimate engagement of a secluded community on the Japanese island of Miyako, part of the okinawa Prefecture. The end product will consist of the three-meter-high sun Pillar and the Moon Stone, a floating LED-equipped sphere, three meters in diameter. 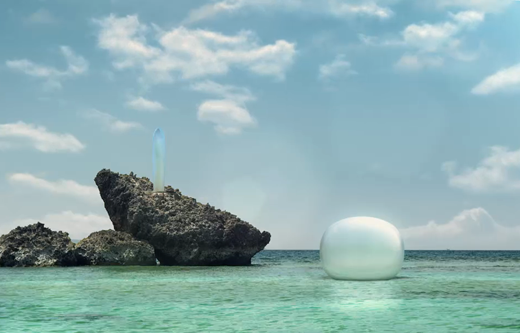 The pillar will jut up from a rock cluster in the island’s seven Light Bay from which it will cast a shadow over the water toward the shore that at the winter solstice will intersect with the Moon stone, anchored in the bay and changing color according to the phase of the moon and the tide. Once this Asian project is completed, Mori plans to bring site-specific works tailored to local cultures to five additional continents, beginning with South America. 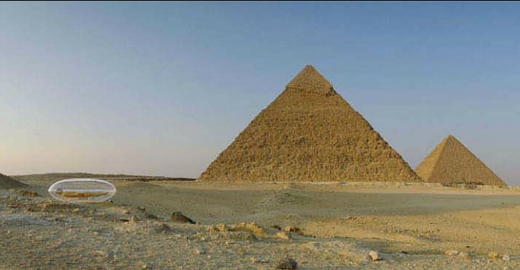 Before officially beginning her work on Primal Rhythms, in 2007, Mori visited a number of sacred sites around the world and was especially intrigued by dwellings from the Jomon period in Japan—roughly 14,000 B.C. to 300 B.C.—which were associated with sculptural forms that later influenced her designs. “Two objects were always found in a particular area,” she says, “a round stone and a kind of small standing stone. The pair seems to me to be a symbol of regeneration, or a wish for help in harvest, or related to worship of the nature god. It’s probably a primitive stage of shintoism.” 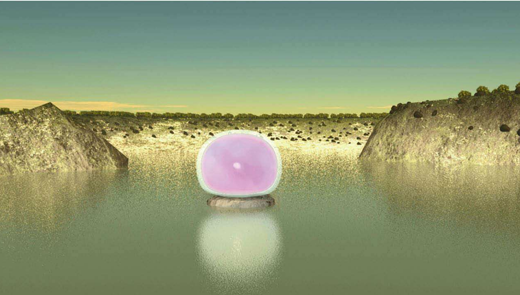 Seven Light Bay will incorporate the Sun Pillar and Moon Stone. The pillar will be erected this month atop two pyramidal rocks in the bay. Originally, the plan was to carry it there in a large boat, but it was feared that the area’s precious coral would be harmed.

“Instead of placing this work in the city, I wanted to place it in the most rich nature, so that people have to travel to actually get in touch with nature and to understand that you are also the nature as well,” says Mori, who spends most of her time in New York. “I like these very ambitious projects—it’s my soul work—but my life work is to interact with the people in the city.” 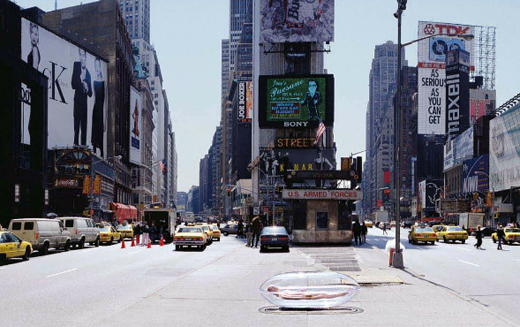