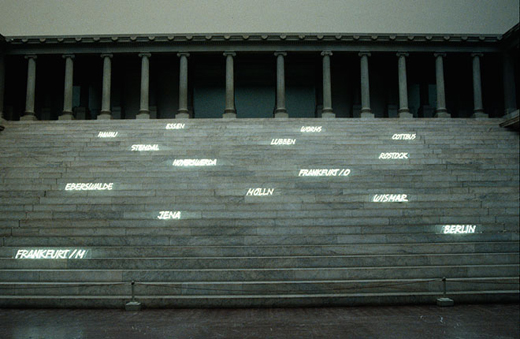 Alfredo Jaar: The way it is. An Aesthetics of Resistance

The Neue Gesellschaft für Bildende Kunst (New Society for Visual Arts) presents an exhibition by Chilean artist Alfredo Jaar simultaneously at three Berlin institutions. The monographic show offers a retrospective survey of an artistic production spanning close to four decades. It gives insights into the political topicality of the works by the two-time documenta participant and elucidates the critical methods of archiving, research and intervention employed by the artist.

The main focus of the exhibition is the artist’s observation of the language and programme of the image, as well as its deconstruction, what the artist has called the politics of the image. Addressing a wide scope of concerns and issues, the exhibition displays key works that address the refusal of the image as well as the poetic mise-en-scene of its absence. Investigations of the visualisation of political and social events and the treatment of the resulting images demonstrate Alfredo Jaar’s critical approach to the media and media publicity.

The title of the show “Alfredo Jaar – The way it is. An Aesthetics of Resistance” refers to two projects that Alfredo Jaar realised in Berlin in the early 1990s. It makes reference to the artistic intervention “Eine Ästhetik zum Widerstand” (The Aethetics of Resistance) that Jaar presented at the Pergamonmuseum in 1992/93. It also alludes to another intervention titled The Way It Was that the artist created in 1991 in an empty ground-floor flat in Berlin.

At NGBK, the focus is on Jaar’s rarely displayed, early artworks: highly political interventions in public space that were produced in Chile between 1974 and 1981, as well as later works dealing with the country and the times of the military junta. 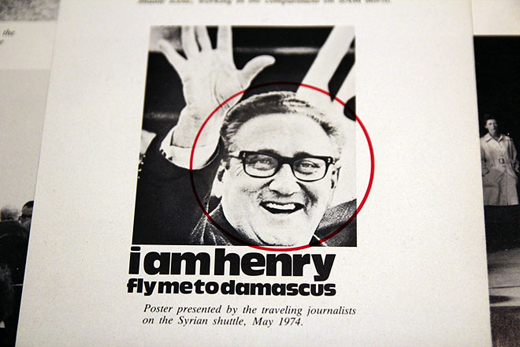 At Berlinische Galerie, four complex groups of works are combined and set in relation to each other: 1) works created in and for Berlin, including the reconstruction of the Pergamon project, “Eine Ästhetik zum Widerstand”, and the photo series “A New World”, which will be presented for the first time ever; 2) works on themes related to Africa, a key focus of Alfredo Jaar’s art, particularly his impressive series on the genocide in Rwanda; 3) installations in which light plays a pivotal role, e.g. “Lament of the Images”, the reconstruction of his contribution to Documenta11 in 2002 and the more recent “The Sound of Silence”; 4) a selection from the “Press Works” series in which the artist repeatedly examines in a pointed way the topicality of press coverage and its agenda. 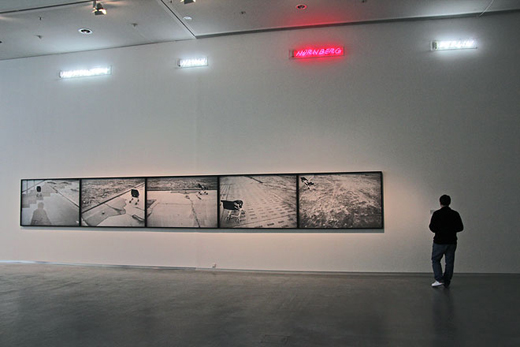 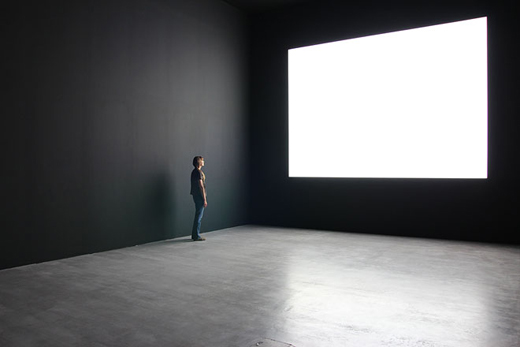 At Alte Nationalgalerie, the exhibition is complemented by two interventions in the 19th century collection: “1+1+1″, an installation produced for documenta 8 (1987) that made Jaar internationally known. The work will be presented for the first time in 25 years in Germany along with “Persona”, 1987, a conceptually similar work from the same period and never before exhibited.

The Pergamon Project: The Aesthetics of Resistance
Jaar installed on the staircase of Pergamon Altar in neon lettering the names of fifteen Germany cities in which in 1992 there had been attacks on homes for asylum-seekers or where immigrants had been assaulted. 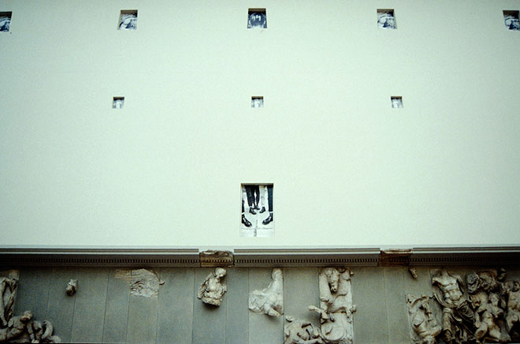 The Pergamon Project: The Aesthetics of Resistance
On the wall across from the altar, into the windowcases Jaar fitted black-and-white photos: Details of violent scenes from the Pergamon frieze along with lace up boots of right-wing skinheads and SS runes shaved in croppy hair.