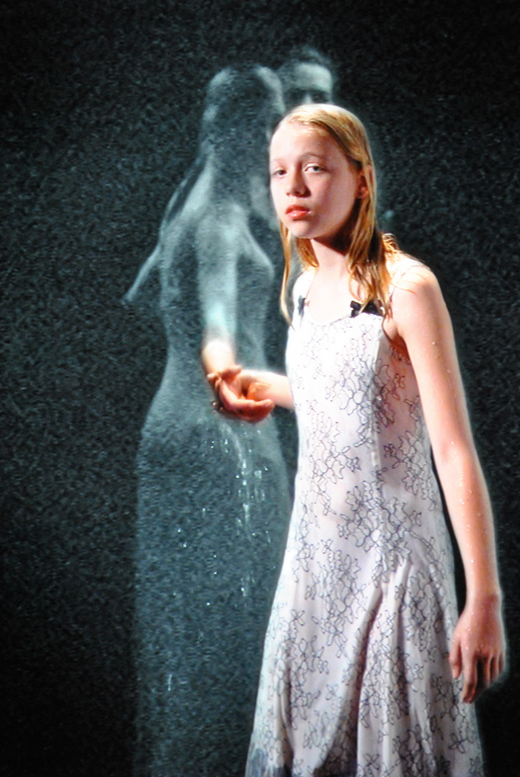 The Museum of Contemporary Art (MOCA) North Miami has announced it will present a major exhibition of work by Bill Viola, recognized as one of the pioneers and leading practitioners of video art. 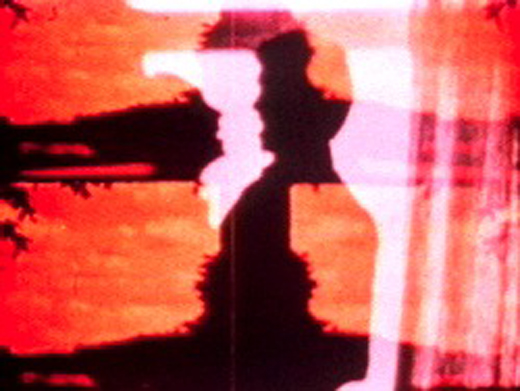 Circa 1971 presents a selection of video and film works by key figures in early video art from the collection of Electronic Arts Intermix (EAI), a nonprofit organization that fosters the creation, exhibition, distribution, and preservation of moving-image art. 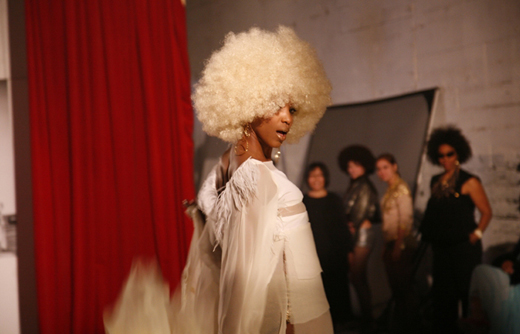 Carrie Mae Weems is a socially motivated artist whose works invite contemplation on issues surrounding race, gender and class. Increasingly, she has broadened her view to include global struggles for equality and justice.

Video artist, performance artist, composer and visionary: Nam June Paik (1932-2006) was one of the most innovative artists of the 20th century. Tate Liverpool, in collaboration with FACT (Foundation for Art and Creative Technology) present the first major retrospective since the artist’s death, and the first exhibition of Paik’s work in the UK since 1988.

The exhibition celebrates Paik as the inventor of media art. At a time when television was still a novelty, Paik foresaw the future popularity of this new and exciting medium. Thought provoking works like TV Buddha (1989) explore the clashing cultures of east and west, old and new, while Video Fish (1979 – 1992) considers nature versus the man made featuring both television sets and live fish in aquariums.

With artworks ranging from scores of early music performances and Paik’s involvement in the Fluxus movement to TV works, impressive robot sculptures and large-scale video installations; Tate Liverpool’s exhibition will both entertain and inspire.

The exhibition continues at FACT. Focusing on Paik’s innovative use of creative technology, FACT will showcase the major laser installation Laser Cone (1998) for the first time in the UK, along with sixteen single channel video works, including Global Groove 1973 and groundbreaking satellite videos Good Morning Mr Orwell 1984 and Bye Bye Kipling 1986

Destricted is the first short film collection of its kind, bringing together sex and art in a series of films created by some of the world’s most visual and provocative artists and directors. They reveal the diverse attitudes by which we represent ourselves sexually.

Destricted acts as a platform for all forms of uncensored artistic expression as it manipulates and embraces the expression of sex through art.

The Destricted brand is the first in a continuing series. The eight films presented explore the fine line where art and pornography intersect. The films highlight controversial issues about the representation of sexuality in art; opening up debate of the question whether art can be disguised as pornography or whether pornography can be represented as art or something else altogether. The result is a collection of explicit, stimulating, challenging, provocative, strange, and sometimes humorous scenarios that leave it up to the viewer to deliberate, discuss, and decide.

Following its success at Sundance Film Festival and Cannes Film Festival Critics Week, Destricted will be released on DVD in the US on November 2 2010.

Much of contemporary photography and video seems haunted by the past, by the history of art, by apparitions that are reanimated in reproductive mediums, live performance, and the virtual world. By using dated, passé, or quasi-extinct stylistic devices, subject matter, and technologies, such art embodies a longing for an otherwise unrecuperable past. 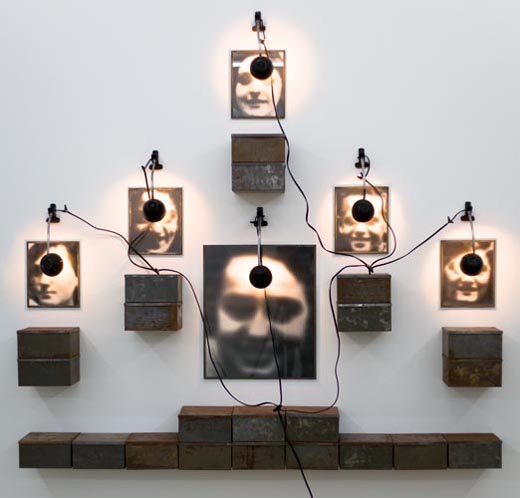 From March 26 to September 6, 2010, the Solomon R. Guggenheim Museum presents Haunted: Contemporary Photography/Video/Performance, an exhibition that documents this obsession, examining myriad ways photographic imagery is incorporated into recent practice. Drawn largely from the Guggenheim’s extensive photography and video collections, Haunted features some 100 works by nearly 60 artists, including many recent acquisitions that will be on view at the museum for the first time. The exhibition is installed throughout the rotunda and its spiraling ramps, with two additional galleries on view from June 4 to September 1, featuring works by two pairs of artists to complete Haunted’s presentation.

Maya Deren (American, 1917–1961) was a visionary of American experimental film in the 1940s and 1950s. A precocious student, she studied poetry and literature at New York University and Smith College, where she became interested in the arts. While working for modern-dance choreographer Katherine Dunham, Deren met her future husband, filmmaker Alexander Hammid, who introduced her to European avant-garde film. In 1943, the couple collaborated on the short film Meshes of the Afternoon, which has since become one of the most widely influential films of the American experimental-film movement.

Deren, who received the first Guggenheim Foundation grant for “creative work in the field of motion pictures” and formed the Creative Film Foundation to broaden support for experimental film, continued making and self-distributing her own films and lecturing and writing about avant-garde cinema theory until her untimely death at the age of forty-four. Her pioneering formal innovations—performing in front of the camera, using semiautobiographical content, and meshing literary, psychological, and ethnographic disciplines with rigorous technique—inspired future generations of experimental filmmakers.

This exhibition, which consists of a video installation in the Theater Galleries and short-film programs in the theaters, examines Deren’s legacy through both her own work and that of a trio of women directors upon whom she had an indelible influence: Carolee Schneemann, Barbara Hammer, and Su Friedrich.

This year Schaulager is presenting Drawing Restraint by Matthew Barney. Drawing Restraint is a series of performances, numbering sixteen thus far, in which Matthew Barney leaves traces in an environment of self-induced physical and psychological restraints. Works emerging from these performances, such as sculptures, vitrines, drawings and videos, are juxtaposed in the Schaulager exhibition with works of art from the Northern Renaissance.

Argentine video artist Mika Rottenberg is known for videos depicting women engaging in elaborate systems of production that often harvest their own body.

Mika’s video installations envision the female body as a microcosm of larger societal issues such as labor and class inequities. In her short films, women cast for their notable physical features and talents perform perfunctory factory-line duties, manufacturing inane items worth less than the labor required to make them. Her homemade machinery and decor are functional but crudely constructed.

These contraptions, operating by pedal, conveyor belt, paddle, rubber band, or string, are reminiscent of Peter Fischli and David Weiss’s kinetic props, though the human interaction in her works adds a carnivalesque element to Rottenberg’s environments, the physical comedy implicit in her narratives recalling Eleanor Antin’s filmed performances. The bright colors of Rottenberg’s self-contained sets don’t disguise the close quarters in which her characters work or mitigate the sense of claustrophobia induced by a dead-end job. A blue-collar work ethic is conjured through the women’s uniforms, ranging from diner-waitress dresses to jogging suits. Her cast often use several body parts at once, reminding the viewer of the feminine capacity for multitasking while it suggests an ironic futility in her sweatshop-like situations. 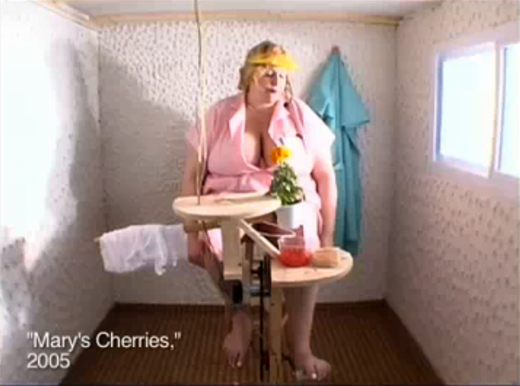 Three previous videos established Rottenberg’s unique narrative approach, in which action is compressed into layers of illogical activity. In Tropical Breeze (2004), a woman in the back of a truck chews gum, wraps it in a tissue picked from a pile with her toes, and sends it on a clothesline to the profusely sweating driver, who dabs each tissue with perspiration to ferry it back for packaging and sale as a “moist tissue wipe.” Rottenberg’s installations often physically echo her videos: Tropical Breeze was screened inside a cratelike box mimicking a big rig’s trailer. Mary’s Cherries (2005) showcases a trio of obese ladies pedaling bikes who, through a magical process of clay kneading and fingernail clipping, transform acrylic fingernails into maraschino cherries. In Dough (2006), one woman smells flowers to provoke hay-fever tears while another mashes a foot-powered bellows into foul-scented air that wafts onto dough, which rises as the moisture and air hit it. Dripping beads of sweat, women’s grunting, and booming machinery dominate the audio, while close-ups of the women’s bodies and faces highlight their resignation to an abstruse cause.

Rottenberg’s newest film, Cheese (2007), conflates farm-girl imagery with the fairy tale “Rapunzel” into a story loosely based on the Sutherland Sisters, renowned for their extremely long hair. Floating through a pastoral yet mazelike setting of raw wooden debris cobbled together into a benign shantytown, six longhaired women in flowing white nightgowns “milk” their locks and the goats they live with to generate cheese. Shots of animals crowded in pens and the sisters’ bunk bed– cluttered room visually compare the women to their ruminant allies. As nurturing caretakers, these women represent maternal aspects of Mother Nature. Here Rottenberg investigates feminine magic, the ability to “grow things out of the body” as she says, as the ultimate, wondrous physical mystery. 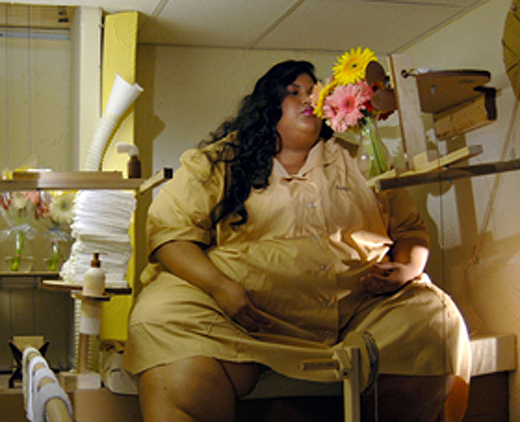 With her video installation Dough (2005/06), Mika Rottenberg has produced an oppressive commentary on capitalism’s alienating work conditions: the moonlight job now takes place in a specially designed sweatshop, where the housewives’ bodies are turned into machines that actually produce sweat and tears. The artist, who was born in 1976, addresses themes such as economics in the post-industrial age or cultural identity; the female bodies she portrays exist far from social norms.

Mika Rottenberg is part of a vital New York scene that is currently attracting a good deal of international attention. Rottenburg’s drawings for Dough were already on show in the pa.per.ing exhibition, which presented paper works by this young generation
of artists in the Lobby Gallery at Deutsche Bank New York. At the Frieze Art Fair, the Cartier Award’s first winner will be showing Chasing Waterfalls: The Rise and Fall of the Amazing Seven Sutherland Sisters (Part 1) for the first time. At the center of this video work are the Sutherland Sisters who became human circus attractions due to their extremely long hair. 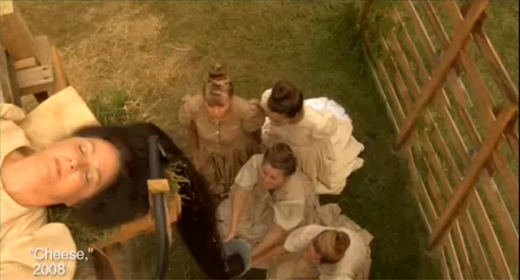